Entertainment, I Have An Opinion, Uncategorized, Words With Friends

Words With Friends: The Zendaya and Her Hair Edition

In this edition of Words With Friends we cover the controversy around Zendaya Coleman’s hair and Giuliana Rancic’s racially charged comments:

After I read the statement my friend referred to above I was confused.

This whole story is a bunch of stunts and shows, on both Giuliana and Zendaya’s part.

Giuliana was wrong for making an off color remark in which she didn’t feel comfortable.

Although saying that because of Zendaya’s faux locs she showed up to the Oscars looking like “she smells like patchouli oil, or weed” was funny; if you have to apologize for anything you say in public, it’s best to keep that opinion behind closed doors where you can talk shit comfortably.

To me Giuliana’s tone and timing was very jokey, and like the style of the late Joan Rivers, it pushed the envelope.

I thought is what “Fashion Police” was known to do…tear a a celebrity down if they think he/she looks terrible, all while offering a comical opinion for entertainment.

In Giuliana’s statement, edgy comedy is all I witnessed and is a part of the show. She should feel comfortable in doing her job by now and shouldn’t have issued the on air apology if she stands by what she said as just a joke.

Both Zendaya and Giuliana need to toughen up and learn how to take shit sometimes.

Giuliana stand by your opinion. If it’s just a joke let it stay that way.

In rebuttal to Giuliana’s apology Zendaya issued the following statement via Instagram: 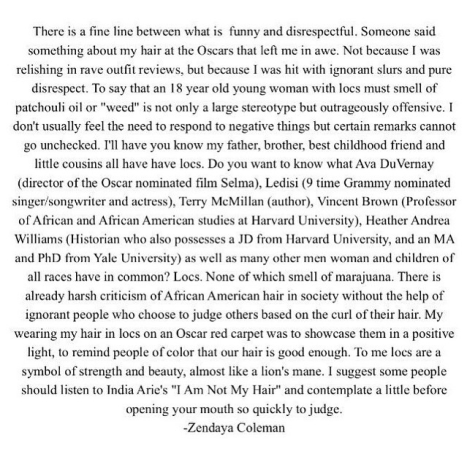 Though the rebuttal is written beautifully and I understand Zendaya feels like the statements made concerning her hair had racial undertones, I still find the rebuttal above rather dramatic.

This statement comes from the same girl who was bashed for accepting (then rejecting) the role of Aaliyah because much of the black race gave her grief for not being “black enough” to perform the role.

Zendaya wasn’t mad then? She wasn’t mad that not taking that role messed up some money, and even though the movie was terrible, a check is a check.

This statement would’ve been better suited in the case for defending herself to play Aaliyah, not over her hair.

It seems as Zendaya took this as an opportune time to finally speak up over something, it didn’t matter what it was, it just was a time to redeem herself after all of the Aaliyah jokes.

It also helped that she she finally had some people on her side based on the outrage over Giuliana’s comments.

Too bad it happened to be over a trivial subject such as hair.

6 thoughts on “Words With Friends: The Zendaya and Her Hair Edition”